Carrie Jones-Barber graduated from Western Michigan University with a Bachelor’s of Business Administration degree in Management in 1982.

Today, Jones-Barber serves as the CEO of Dawn Foods, a company for which she is intensely proud. In 1985, after a short stint in medical sales, Jones-Barber joined Dawn Foods in a sales role and climbed the ranks before being named to her current position in 2006. Prior to becoming CEO, Jones-Barber was president of Dawn Foods International, and has also been a business development manager at Dawn Foods UK Ltd., as well as chief information officer.

Dawn Foods is one of the world’s premier bakery companies, producing more than 4,000 products, employing nearly 5,000 people, and doing business in more than 105 countries. The company supplies a complete line of mixes, bases, icings, glazes, fillings, frozen dough, par-baked and fully baked products, and equipment to the food industry worldwide.

During her tenure at Dawn, Jones-Barber has focused on international growth of the company. She has held various cross-functional roles with progressively increasing responsibility, including CIO, where she oversaw the implementation of the company’s first ERP system, and President of International, where she successfully led a turnaround.

Additionally, Jones-Barber has introduced significant organizational change at Dawn Foods, including global strategic planning processes and change management best practices. Her leadership has placed an emphasis on social responsibility and sustainability, such as initiatives that reduce greenhouse gas emissions, promote greener packaging, support literacy and art programs, work on the prevention of hunger, and provide vocational baking opportunities. Additionally, the Dawn Foundation has had a wide impact on the communities it serves.

As an alumna, Jones-Barber has maintained a strong connection with WMU, and often lends her expertise and experiences for the betterment of students and the Haworth College of Business. She is an active member of the college’s business advisory council and the WMU Bronco CEO Forum, and has lectured as part of the college’s Distinguished Speaker Series. Additionally, Jones-Barber has previously been honored by her college with the Management Department’s Outstanding Alumni Award.

Haworth College of Business Dean Satish Deshpande, who nominated Jones-Barber for the Distinguished Alumni Award, said, “A graduate the caliber of Carrie Jones-Barber is something for both Western Michigan University and the Haworth College of Business to celebrate. As an alumna, Carrie is a standard bearer for our college and an example for our students as to what is possible in the business world with a degree from WMU. Her industry knowledge and gift for strategy and leadership have gained both Carrie and Dawn a well-deserved, stellar reputation within the business community.”

Jones-Barber also holds an MBA from the Kellogg Graduate School of Management at Northwestern University and has participated in the Women’s Leadership Forum through the Harvard Business School. She has served on several boards, including the Land O’Frost board. She has also been involved with Junior Achievement, Girl Scouts, and supported the launch of the Dawn Foundation. She is a member of the Committee 200, an organization that includes the world’s most successful female entrepreneurs. 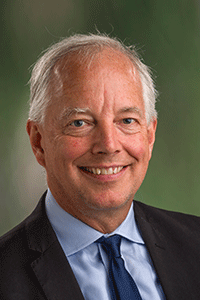 Dr. James Olson graduated from Western Michigan University with a Bachelor’s of Science degree in Biomedical Science in 1984.

Today, Olson is the principal investigator in the Olson Laboratory and a member of the Clinical Research Division at Fred Hutchinson Cancer Research Center in Seattle. He also serves as a professor of pediatric hematology and oncology at the University of Washington School of Medicine and is an attending physician at the Seattle Children’s Hospital and Regional Medical Center.

The lab also aims to discover why and how tumors become resistant to drugs through state-of-the-art DNA sequencing. In 2013, Olson, along with his colleagues, launched Project Violet, a citizen-based crowd-funding initiative to develop a new class of anti-cancer compounds derived from chemical templates from organisms such as violets, scorpions, and sunflowers.

One of his more notable breakthroughs literally lights up cancer cells and helps to improve tumor removal. During surgery, pieces of a tumor can left behind, or, tissue, especially brain tissue, can be cut, causing potentially devastating consequences. Olson worked with a team of researchers to develop Tumor Paint, a drug that acts like a paint, attaching to tumor cells and illuminating them for surgeons to easily remove the entire tumor without causing damage. Additionally, Olson and his team are developing a new class of anti-cancer compounds known as optides, with the goal of creating therapies that don’t destroy healthy tissue, but only cancerous cells.

Olson is a proud alumnus of Western Michigan University and regularly cites his education and experiences in the Lee Honors College in interviews. He also received an Alumni Achievement Award from the College of Arts and Sciences in 2015.

“Dr. Jim Olson truly exemplifies the College of Arts and Sciences’ mission to ignite a passion for learning and discovery, and to contribute to the betterment of our communities, from local to global,” said Dr. Carla Koretsky, Dean of the College of Arts and Sciences. “Jim’s innovative research is driven by an urgency to make a difference in people’s lives. His successful approach to developing better surgical treatments of pediatric brain cancer is based on a unique approach using scorpion venom, and may provide an important tool for attacking many other types of cancer. Jim’s work highlights the life changing results that can be achieved by applying a combination of the creative and critical thinking to global challenges.”

Olson also holds a Doctor of Medicine Degree from the University of Michigan and a Ph.D. in Pharmacology from the University of Michigan. He is a member of the Children’s Oncology Group; The Hereditary Disease Foundation scientific advisory board, and the Society of Neuroscience, to name a few. Olson has been received many honors throughout his career, including, but not limited to, the American Academy of Pediatrics Resident Research Award, and was named an Emily Dorfman Fellow by the American Brain Tumor Association. 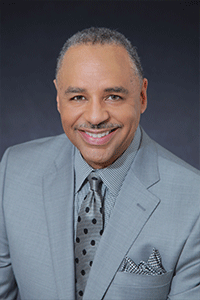 Ed Gordon graduated from Western Michigan University with a Bachelor’s degree in Communication in 1982.

Today, Gordon is an Emmy award-winning journalist and host and executive producer of Ed Gordon, an hour long quarterly news magazine on Bounce TV, as well as host of the nationally syndicated radio program Weekend with Ed Gordon. He can be heard on The Steve Harvey Morning Show and delivers Right Now with Ed Gordon, daily commentaries for radio stations across the country. He is also president of Ed Gordon Media, a multi-service production company.

Additionally, Gordon has become known for pressing hardline issues, such as the lack of diversity in journalism, racial tensions stemming from social conditions, and other issues that revolve around the overlooked and underrepresented. Among his appearances at the forefront of national news are his coverage of the historic 2012 presidential election on BET, President Obama’s second inauguration, Nelson Mandela’s funeral in South Africa, and the 50th anniversary of the historic March on Washington. Because of his accomplishments, Gordon has become known as one of the most important news personalities in the United States.

Over the course of his career, Gordon has become known as a news powerhouse interviewing U.S. Presidents, World leaders, and other well known figures. His list includes Presidents Barack Obama and Bill Clinton, Nelson Mandela, Desmond Tutu, and dozens of celebrities such as Denzel Washington, Oprah Winfrey, Beyonce, and Michael Jackson. He’s also known for bringing viewers and listeners face to face with controversial figures and shining a light on their stories. In 1996, Gordon became the first person to interview O.J. Simpson after his famous acquittal, earning him a three-year stint at NBC-TV. He’s also been a correspondent for 60 Minutes at CBS, led News and Notes with Ed Gordon on NPR, and was a contributor for NBC’s Today Show and Dateline.

As an alumnus, Gordon has been a guest speaker on campus and has been honored several times. In 1994, Gordon was given a place on the Wall of Distinction, in 2006 was honored with a College of Arts and Sciences Alumni Achievement Award, and was also inducted into the School of Communication Alumni Academy.

“In his work and in his private life, Ed embodies the Bronco spirit of paying it forward—forging a pathway to success for himself and encouraging and mentoring others toward the achievement of their dreams,” said Dr. Leigh Ford, Director of the School of Communication. “Mr. Ed Gordon has demonstrated a lifetime of achievement in his long and outstanding career. Throughout that career he has remained connected to this university, has supported its mission, and has always expressed his deep gratitude for the opportunities afforded him while a student at WMU.”

In addition to being awarded an Emmy Award, Gordon has a long list of honors. He has been given the NAACP Image Award, the National Association of Black Journalists Journalist of the Year award, a Communication Excellence to Black Audiences Award for Merit, and has been named by People Magazine to the “50 Most Beautiful People in the World”S list.